Reports and photos of some of our earlier walks have now been archived but are available to read as Word documents - please click here to make an email request, specifying date (if known but not essential) and location.

There are EIGHT reports below - please scroll down! 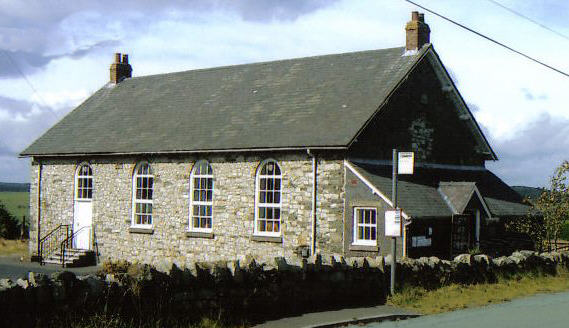 A group of eight enjoyed a leisurely stroll from the Bog Centre car park.  We saw swallows and wood pigeons in the car park area together with the first of several kites.  The walk featured many raptors – buzzards, kestrels and sparrowhawks in addition to the kites and we spotted several crows and ravens.  Jay, great spotted woodpecker and wren were heard.  Later we did actually see a woodpecker in its characteristic undulating flight.

Near the group of Hebridean sheep, we saw pied wagtail, dunnock, song thrush, magpies, stock dove and a flock of house sparrows.  Walking further along the moor we had good views of stonechats and meadow pipits and probably one or more whitethroat.  Heading back down through tree and hedge-lined paths we heard greenfinch and saw goldfinch and starling.

Back at the centre there were flocks of housemartin, a few swift and a single pheasant.

It was a good walk for birds but also for other wildlife.  Although not especially sunny or warm, we did see many butterflies – grayling, ringlet, tortoiseshell, meadow brown, small heath and a couple of six-spot burnet moths.  A minor detour into a field allowed us an excellent view of some mountain pansies. 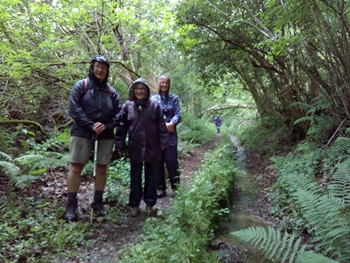 Ten jolly birders gathered at the rendezvous in the lane by Brandhill Farm. It started to drizzle. So we donned our wet-weather gear and set off down the sunken lane into Brandhill Gutter. Spirits were high and although we didn’t spot too many birds, there were quite a few calls/songs to argue about. These included Blackcap, Robin, Willow Warbler and Song Thrush. There were some flowers in the banks of the lane, but the best were found at a small pond. These included Yellow Irises, Bistort, Forget-me-nots and a White Water-lily.

At the lane end, we took the path across the meadow and down into a wood. We were glad of our sticks here, because there was a short slippery slope to go down. The vegetation was lush and wet, so required a lot of nettle bashing plus knocking off the drips! At the bottom it was necessary to cross a shallow ford. Here the path forked. As the left hand path was wider and less overgrown, it was decided to continue this way up to a road and back to the cars. On the way along the path, we stopped for a short coffee break and enjoyed the view over Aldon Gutter.

The road went steadily uphill. Since the drizzle had stopped by now and the sun was trying to make an appearance, we were able to shed some of our layers. Sky Larks were heard, three Yellowhammers were seen in tree tops and a Red Kite passed over. In spite of the weather, it was a very pleasant outing which was nicely rounded off with us having lunch together at the Discovery Centre in Craven Arms. 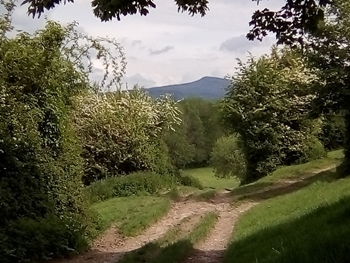 South Shropshire RSPB took part in a survey of farmland around Caynham Camp. This had been organised by Hazel Bows and was an area of traditional pasture with well grown hedges and shrubs, ideal for farmland birds. We observed 35 species. Hopefully we will be able to visit again next year.

The day dawned disappointingly wet and gloomy and visibility was poor.  However, by 10:00 AM when 8 of us started to descend Ashes Hollow from Boiling Well on the Long Mynd, the rain had stopped, brightness and visibility had improved and there was no wind. We watched our footing for the first few hundred yards through some mud and eroded places but when we reached a decent stretch of path and could take our eyes off the ground, we soon realized how active the birds were.  The following were spotted:


The most numerous birds were the Willow Warblers (1 about every hundred yards!), Stone Chats and Chaffinches in that order.   At 12:30 PM we turned around just before the “gorge” which is about halfway down Ashes Hollow.  The highlight of the morning occurred on the ascent:  a “dogfight” between a Red Kite and a Peregrine who stooped three times.  At one point, they locked talons and came whirling down towards the ground disengaging in time to avoid a crash landing.  Feathers flew and the Kite eventually decided to get out of the Peregrine’s way.  The fight occurred over the ridge on the opposite side of the valley to the Peregrine’s nest site and we did not see what started it.  We were unable to see into the nest.

Not everyone could stay but 5 of us had lunch together at the Hollybush Café in Church Stretton afterwards.

The weather gods decided to be kind to us this time and we were treated to glorious sunshine and warmth... at Easter! The small car park was filled to capacity but we managed to squeeze in, and twelve of us set off down the disused railway track to a deafening accompaniment of optimistic spring birdsong. All the usual woodland species were out in abundance: nuthatch, tree creeper, coal tit, chiffchaff, blackbird, robin, chaffinch, wren... all seemed to be vying for our attention.The trees were coming into leaf (earlier than usual?) but the woods were still clear enough to allow good views. In the slightly more open area to the left we heard the "falling downstairs" song of a couple of willow warblers. Ah... was that a wood warbler churring deep in the trees? No-one could be certain but further down the track we met another birder who assured us that he'd heard (or seen?) one too. So that's a definite maybe.

After a while we headed off the track to the right into Knowles Coppice and followed a narrow, steep track, with a precipitous drop on one side (not much fun in wet muddy conditions - thank goodness it was dry), eventually reaching the bottom of the valley and the Dowles Brook. Here we found the derelict 18th Century Knowles Mill, preserved by the National Trust, who have thoughtfully provided information boards and a sheltered seating area. This was a perfect place for a coffee stop with its peaceful atmosphere, gently babbling stream and picturesque bridge. Dipper and grey wagtail were soon added to the list, but sadly no kingfishers.

From here we carried on in the same direction, heading back uphill then crossing a tussocky meadow to reach the forest warden's cottage, where we rejoined the wide railway track and began the leisurely stroll back towards the car park. A blackcap serenaded us on the final stretch. All morning, throughout the walk and at our coffee stop, we'd been treated to wonderful birdsong. There was also a wide variety of other wildlife to enjoy - early flowers, squirrels, an attractive copper-coloured beetle, and quite a few butterflies: holly blue, orange tip, green-veined white, a couple of brimstones and one or two red admirals. The morning was rounded off nicely for most of us with lunch at the nearby Hop Pole pub.

The forest is easily explored from this area along several waymarked trails. There's an information board in the car park, parking is free (unlike at the main visitor centre) and there is usually adequate space - though perhaps weekends and glorious weather (and particularly both together) are best avoided!

Only three intrepid birders turned up on a wild and windy morning. The rain kindly held off but the wind made birding very challenging. But the views and scenery were glorious as we walked along the ancient ridgeway known as the Port Way. We were delighted as a skylark took off right in front of us – almost stationary as it struggled against the wind.

As we walked down into the Golden Valley the wind defeated the usual stonechats but we could hear linnets. We were treated to a dramatic aerial display by a pair of ravens – seemingly thrilling to the wind. Siskin were heard in three areas and there were plenty of corvids about. A pied wagtail appeared near some barns. As we returned via Middle Darnford we saw Meadow Pipit and a kestrel.

Despite the wild weather, Carol, Janice and Isabel agreed it was a lovely walk and were pleased with a total of 18 species – a walk to repeat in calmer conditions! We enjoyed an excellent lunch at Bridges. 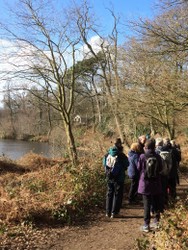 A total of 15 members turned up in near perfect weather conditions to see what the varied habitats of Colemere would reveal.

A quick scan from the car park end revealed a few Goldeneye & Tufted Duck and a passing flock of Lapwing probably headed for the nearby Wood Lane.  The marsh area didn’t produce any Snipe but we did find Meadow Pipit & Reed Bunting.

On into the deciduous wood where we’d been hearing the Great Spotted Woodpecker drumming and one gave good views on one of the many dead trees.  The woodland was busy with Tits, Nuthatch & finches all singing well as the warmer weather had somewhat lifted their spirits.  Further along a Treecreeper gave excellent views as it remained in a cavity for some time giving everyone a chance to enjoy it.

Quite a number of Buzzards were seen along with two flyover Sparrowhawk sightings.

Nothing much more seen on the coniferous side of the mere but a few Common Gulls were identified amongst the Black-headed.  In all 38 species identified.

A few of us then went onto to Ellesmere to enjoy the refreshments in the Boathouse. Many thanks to everyone who attended and made it a very enjoyable trip.

Back to Home Page